This morning I skipped my usual morning habit of writing a blog post, and instead decided to watch the men's cross country skiing relay in the world championships.

Something interesting happened. Each team had four contestants who went for three laps each. As the third of the four men went for his turn, everybody did their absolute best. They drove hard, went fast.

But as the last part of the event began, everybody slowed down. The Swedish, Norwegian, Italian and Russian teams had a huge advantage over the rest of the contestants. Around 13 seconds to the german guy, and something like a minute to the next guy behind him.

Yet they slowed down, saved their energy for the last lap. They practically slowed to a crawl, and even some skiers who were a minute and a half behind them, caught up.

But the four guys in the lead weren't worried. They knew they were the best, were in the best shape, and that they would have no trouble beating them when they needed to.

The most interesting part of all, I think, being a marketing junkie and all, is how just about everybody adapted their own race to that of Petter Northug, the Norweigan. He's probably the fastest long distance skier in the world.

Edit: Found a video from today's event, as they cross the finish line. Also, gotta love the Norwegian commentators. No, it is not the same as Swedish. 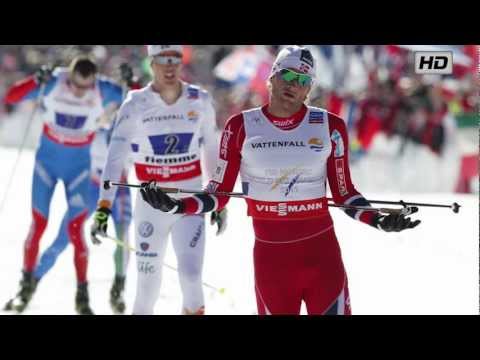 Nobody really ever beats Norway. They are the uncontested champions of all things cross country skiing.

So they keep wondering what Norway is going to do, and try to mold their own race to them.

When Norway comes a knockin', everybody runs scared.

They have an unbeatable advantage in two ways. One, they are the best. Our team, Sweden, as well as a few others... they sometimes come pretty close. We got the silver today, our sixth silver medal in this championship, right on the heels of Northug. We even win on occasion. But if I had to bet money on it, I'd bet on Norway every time.

But secondly, and more interestingly, is that everybody knows that they will probably win. That's an insane psychological advantage. Everybody knows that Norway always wins, so they will probably win again. So they enter the race already sort of expecting not to win. Maybe not everyone does, but from listening to the TV commentary, it seems everybody is scared senseless of going head to head with Norway.

In marketing, this is what we call positioning. And in business and marketing, positioning is king. And in marketing, you don't necessarily have to be the best. It isn't about being the best there is. There are a lot of people who are ridiculously good at something but aren't especially well paid.

And for those obsessed with being the best, this sounds bad and unethical. It isn't bad, it's reality.

One of the big things about becoming not only successful in life, but gaining a high level of satisfaction and happiness with life, is the idea of living in the world as it is, not as you think it should be.

Most parents try to raise their children in a fictional world -- their ideal world, the world they think their child should be living in. But that world doesn't exist. Growing up means to come into alignment with reality. If you want to have mature children, don't hide them from the world. If you speak to a small child, you will be shocked at how accurate they are in their judgements of the world around them. But thinking in those ways are inappropriate for children, so we lie to them instead and try to make them behave like we think they should. Yeah, Santa is real, and so are all these other things I think you should believe about the world.

What I'm trying to do with posts like these is demonstrate how principles like these apply universally. Marketing, skiing or parenting, whatever.

A lot of people will not agree with me about a lot of things, but the whole point is that I don't care and it doesn't matter. No matter what you think, reality is reality, and if you want to achieve any level of success, you need to be willing to play the game. Fight reality, as most do, or accept it and move with it. The latter is a whole lot more enjoyable.

My formula for happiness is Honesty + Acceptance + Trust. It's the last section in my book, Magnetism.