Tales Of Cambodia: Start in Siem Reap (The Beginning)

Our plane lands in what could be the opposite end of the Earth, having come from Seoul. It's Christmas Eve and the Cambodian night is still hot enough for shorts and a tank top. Brett hooks up to a third world data plan, while I withdraw first world cash: Cambodians prefer US dollars to their own currency to the point where their ATMs dispense Andrew Jacksons. As if I needed another reason to visit, this factor lowers the costs of Cambodia even more.

A pile of tourists congregate outside the departure area looking lost. The tuk-tuk drivers circle the uncertain white mass. For the rest of this trip, we'll share almost every tuk-tuk ride with a stranger, usually a pretty young thing if I can't find anyone more useful. But right now I'm travel-rusty, so we go with a driver parked outside and head to the center of town by ourselves.

Travelers' accounts of Cambodia in the previous decade painted pictures of poverty on every street. A night with a ten year old could, and still can be bought for less than what you would pay for a steak dinner in London which I might add is neither as satisfying nor delicious. But today as we are driven down the long straight between the airport and downtown, it is opulence, not poverty which disgusts me. Having just escaped the mind-numbing blandness of Korea, it was no welcome sight to pass by at a dozen Korean tourist hotels minutes from the airport:

For more than a moment I resent my literacy in hangul, as I would have preferred to remain ignorant to the typical Korean tourist mindset. You will see their disdain for local food and culture anywhere in the world, whether it's Vietnam, New Orleans, or Rome. And here in Cambodia, their xenophobia is matched by their virulence. A silent spring of Korean businesses carve out what little profits from tourism that the Japanese have not already locked down and make sure that the bulk of the money will be recycled amongst Koreans, never to be seen by Khmer eyes. The Korean tourism industry is the culture-eating slug that leaves behind a trail of slime, slime that acts as lubricant to streamline the hordes of tasteless kim-chi eating child-fuckers into every orifice of South-East Asia until ten years from now, we will sip our six-dollar coffees and tell eachother, "Oh, Cambodia? I went there. It used to be a beautiful country."

The tuk-tuk drops us off at a rumbling intersection of Soviet-era vehicles and broken sidewalks and I can breathe again. Our hostel is a few miles North, and we don't mind the walk along the river. There's not much to look at, as Siem Reap is a very small, tourism-funded town with little interest to non-locals outside of town center, Angkor Wat, and a few museums.

Angkor Wat is immense enough for me not to shame it with a picture taken from my phone. Instead, here are monkeys. 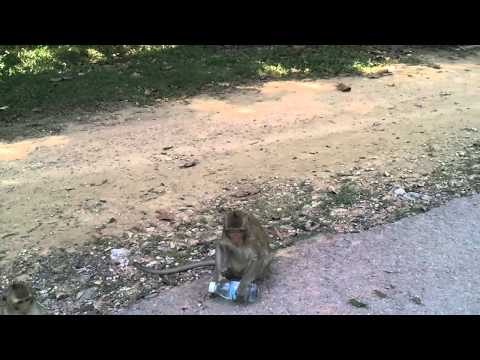 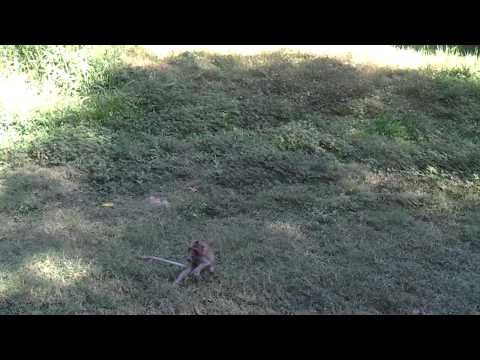 Aside from the main temple, there is also Wat Bayon and Angkor Thom inside the complex. I enjoyed Thom more than Angkor Wat itself because less of it was restricted and the tourist traffic was not as bad.

Angkor Wat is best visited before sunrise to avoid the Korean tour groups who can be quite inconsiderate. It's also prudent to have your marijuana ready the night before; the viewing of nature is complemented by the inhalation of it.

We spend our our two days in Siem Reap getting high and eating great food- two things Korea tries to make as hard as possible. The lok-lak at Moloppor was the most delicious beef salad I've ever had. The black pepper sauce and the fresh tomato slices will have you smiling until your cheeks are sore. Moloppor can be found East of the river, a few minutes North if you're walking from downtown.

It doesn't taste as bad as it looks, but you aren't eating it for the taste anyway. The happy pizza shops sit at edge of downtown. The THC may not hit you for over an hour, or it may not hit you at all. Two hours after my happy eggplant parmesan my brain was doing barrel rolls. I may not have been in danger of falling off the top bunk, but when you visualize yourself doing so every time you close your eyes, the distinction doesn't seem that important.

Happy shakes- a total waste of money and marijuana. What you want are Magic shakes, as psilocybinic mushrooms don't need to be activated like THC does.

It was nice to see that even the tourist prices on market street were still quite low. A dollar or less for a cold beer, 7$ for a massage. Of all the tourist-friendly massage places we could have gone, I ended up taking us to the dirtiest one. One woman gave me a nice, if not unenthusiastic oil massage. Of course, at some point during the massage she asked me turn over, and started moseying on down towarsd my halfie. At this point, another woman walked in and began negotiating additional services out of me. She offered a two-girl massage for $25 with happy ending implied. I wasn't biting, though I did applaud their strategy of putting me in a state of arousal first, something that's been well-documented.

One thing lead to another, and by one thing I mean the first woman's finger, and by another, I mean my asshole. The prices they were quoting me for additional services kept dropping, and dropping, and dropping and I started thinking, "How low is this filthy peasant willing to go? Would she really eat me out for a dollar?" Finally, with one hand fluttering about my genitals and the other still in my anus/perinum area, the price seemed to bottom out at 14 dollars and 25 cents. Not an additional 14 dollars and 25 cents mind you, that's including the 30 minute oil massage already in progress. The shenanigans had been going on for so long that I didn't notice that I was no longer aroused mentally. I'll leave what happened next to your imagination.

No I won't. Girl number 2 started massaging my thighs while the Girl number 1 kept playing with my balls and asshole. When Girl number 1 started getting more aggressive with me, I realized that this sly bitch had been hiding a serious case of dishpan hands this whole time. How could I have missed that! Had she been jacking off cactii for the last two years? Or Pokey from Super Mario World perhaps?

But the surprises didn't stop there. She had another even more sinister trick up her sleeve. Before I go on, I should also mention that Brett was 10 feet away from me, separated by drape. Later, he would deny even turning over on his back, and claim that a rat ran over him during his massage.

Speaking of good values, check my (incomplete) accounting records of our trip:

We stayed at the Velkommen Hostel, run by a Norwegian guy. They give back to the community, they are very proud of their little Khmer chef (she's cute, too), but they are quite far North along the river. It was a good hostel, but there are many great hostels in Cambodia so all I will say is that the Norwegian meatballs were better than I expected.

So this concludes my Tales Of Cambodia series. As I said when I started, I wrote this in reverse chronological order for no reason other than to experiment with my writing. I was in a very strange emotional state months ago when I wrote From Siem Reap to Busan, and by the end of this journey I am somewhere completely different. The writing is inconsistent because my moods changed and I didn't embellish; our time in Kep and Kampot, even Phnom Penh was at best riddled with benzodiazepine blackouts at worst uneventful.

More than enough time has passed so that there is now an epilogue to the epilogue, and the prologue if there ever was one has been long forgotten. I'm no longer dating the person I came back to from Cambodia. I don't mind writing that her asshole tasted like lavender cream, but what happened after is something I will keep off this blog. Some things are best kept private.

Well, it's been fun. SEE YOU NEXT TIME, SPACE COWBOY.

You
Massage in Phnom

Cambodia is known as Kingdom of smile. And the keyword is Happy.

They have Happy Pizza but you can also get Happy Massage in Cambodia!!

Just enjoy and be happy during your trip in Cambodia.

This is really funny.

I am confused as to whether you are male or female? Here is my Camodge story from oh so long ago:

Oh herro Pokey - nice to see you again. It's been about 15 years or so! How've you been? Glad to hear things are going well for you in Cambodia...