pictures not of mud fest

The Boryeong Mud Festival may have once been a celebration of Korean culture mixed with festivities in the mud, but it has long since been claimed by foreigners as an excuse to get drunker and dirtier than usual. Our bus decided to express our excitement at the prospect of getting drunk in the mud after a six hour bus ride by getting drunk during the six hour bus ride. It was 9 AM.

I’ll spare you my long winded story for now and just get into my opinions on this festival:

Boryeong is a textbook tourist town. The mud festival is on for like two weeks a year, and hordes of foreigners come to get wasted. There’s a ton of drunk English teachers and a ton of big black Army men, but also many families just out to have a relaxing vacation.

The entire beachside town is alive with thousands of people, really a lot more than I expected. But the actual festival itself was a huge disappointment. Mud Fest has definitely outgrown itself the attractions such as the slides, mud wrestling, and other inflatable structures are not nearly enough to accommodate all the visitors. When we got there, tickets were sold out, so everybody just jumped the gate. But that wasn’t enough. Even the shittiest little mud pools had massive lines. There were way too many people, and not enough mud.

By the time night rolls around, everyone’s fucking hammered. The main club in Boryeong is S & S, a 4th floor club that plays hip hop. Despite the 20k cover there will be a line all night. Just sneak in through the back stairwell behind the Angelinus Coffee. Me and my friend went in drunk as shit and just danced our slutty asses off for four hours. The music was great, the girls were…okay, and overall the club was really impressive for being a club in a small town. I would recommend it especially if your into having black dicks inside you, because there were plenty standing around scoping out the girls.

The short of it is that me and my friends had a fantastic weekend of drinking, clubbing, ass fondling, titties and clitties, incomplete hand jobs, and delicious seafood. I did get into some weirdness on my way back from S&S which I’ll elaborate on now.

People were bombed out of their minds, some of these fools had been drinking since 9AM so I knew I was going to see some total tragedies of the night. I ran into these two girls from my EPIK intake, one of which was completely hysterical, bawling her eyes out in the rain about being lost (3 minutes away from the pension). This shit was hilarious- I’ve never seen a woman’s face contort like that. It was like she was having an orgasm of utter despair. I don't mind mentioning her because she’s normally not a bad looking girl, but at the time you'd have thought she was homeless on Bourbon street, post-Katrina. When I got back to my room, the fucking door was locked. Sean and Tanner were still at the club, totally trashed, Anthony and Chris were MIA, and the other two goobers had the key. Thankfully, a really nice girl from my intake came home at that time and let me go through her room so I could get in through the balcony. Just kidding, she slammed the door in my face and said no before I even got three words out.

Normally I might have acted differently, but I told my friend from college I’d sneak her into our room so I had to make an executive decision. Ryan came out of the other room next door and I asked if I could get through to the balcony. He said, “Sure, no problem,” instead of slamming the door in my face because he is a nice person.

I knew our balcony was probably locked, and sure enough it was. I tried to fuck that door open from eight different angles, and all for naught. Between the possibilites that the goobers lost the key, weren't coming back soon, if at all, or left it with the ajumma, our chances of sleeping in our room were grim.

I sighed deep, resigned to my fate and went back downstairs to disappoint my friend. All of the sudden, someone started yelling from behind me. As I turned around, I heard the sound of glass shattering as a bottle ricocheted past the part of my dick that feels best during a blow job. I flinched, and recovered just enough to see a dark figure run off into the night. Just my luck, the bottle had put a hole through my door, right where the lock was. I slid my hand through the hole as gently as one would fist a toothed vagina and fumbled the door open.

Me and Jane slept on glass and blood that night, and it was a good two hours before anyone came back to the room. Chris, Anthony, and the goobers didn't even come home until sunrise, whence we learned that they had indeed left the key with the ajumma, ensuring that we'd have been locked out until 10 AM, had a mysterious stranger not tried to suck my dick with a flying beer bottle.

On the bus ride back, the goober that Chris accused of being a total wank got absolutely hammered and our whole bus watched as he pissed himself at a rest stop and stumbled towards cirrhosis.

In its current state, Mud Fest is a sad excuse for a festival. At the same time, everyone that went to party had a great time. I've been thinking about it and I think I figured out why.

Many people started drinking at 9, boys had pussy on their minds, girls were trying to score some dick too. We booked entire pension houses for a single night, after a 6 hour bus trip. What I'm trying to say is that we had inadvertently recreated the first weekend of Freshman Year. People were a lot drunker than usual just because they were Elsewhere. I'm just surprised nobody ended up contracting meningitis or joining a fraternity.

Bonus Video: Sights along the bus ride were pretty sweet. 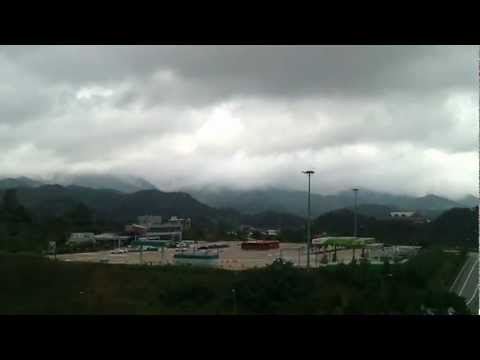