Ethical hackers or white hats like Palestinian programmer Khalil Shreateh get paid $500 to expose potential flaws in Facebook's programming. Khalil says he sent two requests to get the $500 bucks he sought, but Facebook ignored him. A Facebook software engineer Matthew Jones said that Khalil's initial report was poorly worded, although he acknowledged that the company should have pressed for more information. "We get hundreds of reports every day... Many of our best reports come from people whose English isn’t great — though this can be challenging, it’s something we work with just fine and we have paid out over $1 million to hundreds of reporters. However, many of the reports we get are nonsense or misguided, and even those … provide some modicum of reproduction instructions.”

So I guess it prompted Khalil, the unemployed Palestinian to post the following on the Founders Wall using the flaw he was trying to the money for:

First sorry for breaking your privacy and post to your wall, i has no other choice to make after all the reports I sent to Facebook team.

My name is KHALIL, from Palestine... 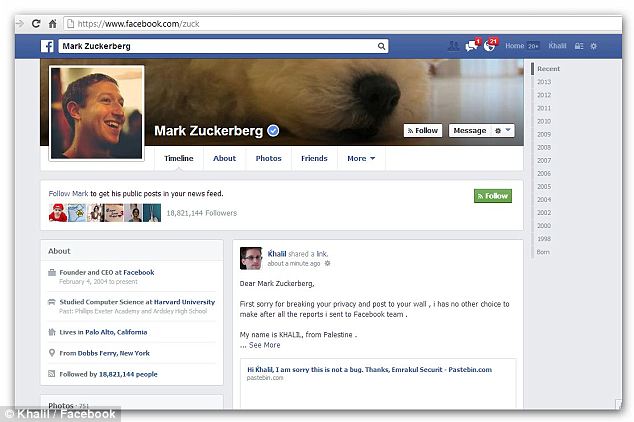 Although, Facebook refused to give him the $500 bucks and apparently suspended his account temporarily (due to legitimate reasons which ethical hackers understand) I saw an interview with him claiming he is getting plenty of job offers.

You thought you had Freedom of speech or press... think again

The UK authorities have raided and destroyed the Guardians remaining hard drives to halt future publications of the NSA leaks by Snowden. Well I guess it is no big deal that an internal audit of the NSA has revealed 2,776 incidents of "unauthorized" collection on US citizens over the previous 12 months or similar claims in the UK. It turns out the NSA can make your own rules, break them, and then cover them up.

The guardian editor, Alan Rusbridger who in a long editorial says a British official advised him, "You've had your fun. Now we want the stuff back." It is very disturbing that Alan claims to have explained to government official that they have no jurisdiction over the forced destruction of the Guardians property as it has subsidiary offices in New York, and that Glenn Greenwald was in Brazil, and that future reporting on the NSA did not even take place in London. All failed to stop the destruction of the data at their offices. What could be worse than this? Intimidation? Scare tactics? Think harder....

The full excerpt from Alan Rusbridger:

I'd driven by dozens of times and never noticed it. Tucked away from the main parking lot, vines had begun to cover the corners of the building. Pieces of sheet metal were hanging from what once might have been a modern looking building.

A Wheel of Fortune aficionado may have been able to make sense of the remaining letters on the marquee. It probably said "Home Alone", "Kindergarten Cop", and "House Party" or some other movies from 1990.

That's when the movie theater was shut down. It was built on the edge of a hill, and half of it was now a few inches down that hill. The building had cracked apart and been condemned.