The blog that builds your audience

Ready to start blogging?
I have a blog.   I'm new to blogging.
Why use Sett? 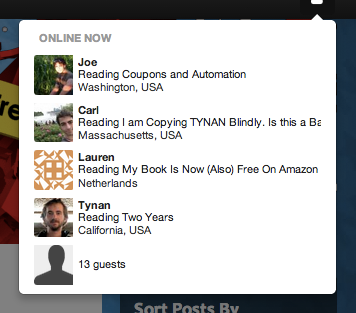 Your posts are read by other Sett readers. Even if you've never blogged before, people reading similar articles across the Sett network will find your post.

"I got more views in one hour than I got in a month." -Mariano 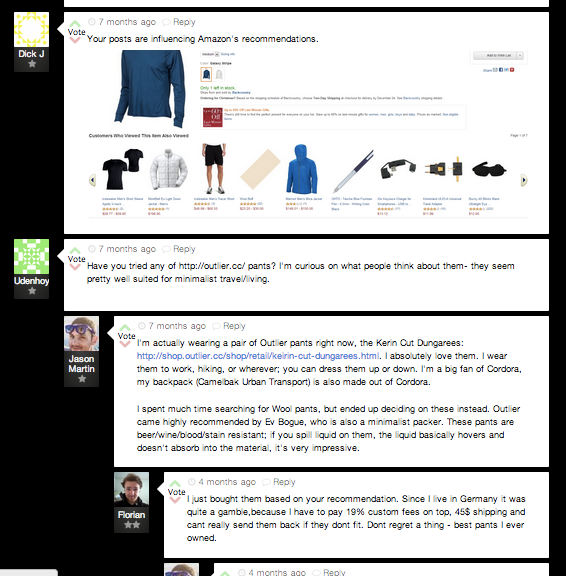 Your posts get votes and more, higher-quality comments. Blogs average 98% more comments after switching to Sett. Voting surfaces the best posts & comments, so you make a great first impression on new readers. 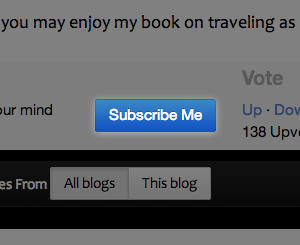 Every interaction guides readers to become subscribers -- with one click. They're notified of new posts and of new comments on posts they've followed, and they're constantly re-engaged via email.

Your readers have a living place to communicate. Readers start their own discussions in the community section. They see who's online and which posts are being read. Your blog is more than a collection of posts.
What bloggers say

“ ” Protip: Try Sett to start a blog — it’s a great way to grow an audience and community.

“ ” I have more repeat viewers and more frequent commenters. Rather than just building a blog, it feels like I have built a community.

- Xin He of Minimalist Wealth

Learn more:   I have a blog.   I'm new to blogging.
Top-ranked posts on Sett

I have reached a pivotal point in my life.

Lately I have been feeling sick.

Sick of the modern world and the "21st Century Mentality", as I have taken to calling it.

Is Windows Phone 8 shedding its moss?

In a world where to the untrained eye the top two devices in the smartphone sector Android and iPhone are pretty much similar with the columns and rows of icon's and pretty much the same apps. The industry needed a shake up as the two pioneers slowly go from innovative to consumer and that has come with another big hitter Microsoft.

Microsoft's tack record is interesting in the PDA/Smartphone space for years it tussled with Palm in a David and Goliath like battle between innovation at Palm and pure corporate might at Microsoft. Ironically the complacency Apple and Google find themselves unwittingly sliding into is the same malaise which Palm and Microsoft found themselves in when Apple blew a gaping hole in the who marketplace with the iPhone.

Microsoft dipped its toe back in the water with a radical new UI design with Windows Phone 7, and in the process alienated many people when it shipped Windows Phone 8 not as an update but a new revolution of the interface.

That hiccup aside, what Microsoft have done with WP8 is not just show the world "another way" of interacting with a phone, smart tiles, resizeable icons and solid hardware which has taken its share of time to get a hold, they have also shown that the "cottage industry" style of apps. Developers creating apps to interface with the Big Players such as Instagram, Facebook, Twitter for example are putting out apps which are actually proving to be better than the apps these vendors themselves put out.

Recently a friend told me about his fear of writing. He explained to me that he considers himself an ever evolving individual -- always learning, adapting, and evolving. Writing to him, is a snapshot of his 'self'. He feels that writing, in a sense, holds his soul captive and unable to learn, adapt, or evolve. I agree with my friend. As a result, I face a paralyzing fear that immobilizes my flow of ideas and impedes my writing. Luckily, I live to challenge myself and thrive from obliterating my fears. Welcome to my blog.

As one of those so-called "content creator"-type persons in the world today I've often struggled to come to terms with how content is treated in the digital age. I've studied and practiced for years to create content that can (and I oftentimes believe should) just be given away. There's this internal conflict constantly going on between the part of me that's worked hard for years to create this valuable content and the part of me that says, "¡Viva la revolución! Make it all free!"

So I was really excited to see this video of a presentation on 'Monetizing Information' given recently by my friend Eric Neuman in New York. I've been friends with Neuman since college and besides being a brilliant programmer and entrepreneur (he's co-founder and CTO of DecisionDesk) he's an extremely insightful visual artist and theorist. He's one of those rare individuals that can analyze a problem from almost every angle, break it down into its raw parts and come up with radical, yet practical solutions--something he not only does every day in his work with DecisionDesk but also in the realms of artificial intelligence and, in this case, the future of the economy and its impacts on society.

Maybe retirement isn’t the right word. If there’s a word that means, “I’m free to live the life of my dreams,” I’m that.

Three years ago I joined a tech startup and have been extremely busy with that. This last year or two I’ve been struggling with a growing sense of dissatisfaction with my life, however. By all appearances I was an amazing success story. Here was a guy who dropped out of high school to live in the woods, been homeless for a stretch, and was now living the high life as an international businessman. We had been successful enough to provide an extremely luxurious lifestyle: 500,000 miles of first class flights around the world (for meetings), the finest luxury hotels, Michelin star restaurants, and some really fancy clothes.

The more money I made, the more things I felt I needed to be happy. This is the problem with things. They don’t really “make” you happy, and there’s always a cooler, more expensive “thing” that becomes your new target of satisfaction. It’s known as the Hedonic treadmill, and it’s why there are so many miserable millionaires out there. My $5,000 (Bell&Ross) watch was great until I had the $15,000 (Panerai) watch. Next in line was a $40,000 (Audemar) watch.

Just writing this makes me feel like a tool.

The old lady was staring at her. She knew it.

Four months ago, Julia had married the love of her life. Her husband, Mike had just been named head curator at the art museum where he was working in. She was three months pregnant with a boy they would call Joey and after Joey is born she would quit that stressful writing job of hers to be a full-time housewife. Nothing could go wrong in her perfect life.

The day it arrived, Julia and Mike were busy unpacking their luggage from their trip to Venice when the doorbell rang. Julia ran out to get the door and when she opened it and looked down, there it was.

The package was encased by a bubble wrap, with an additional layer of plastic over it. At first glance it was about two feet tall and one foot wide. Julia carried it into the living room and unwrapped it. The rectangular wooden frame in the package was old, but kept in good condition. Flakes of the golden paint that coated it were coming off but it was still a beautiful frame, with very fine carvings of flowers at its corners. But Julia didn’t notice that, her eyes were fixed on the painting in the frame.

It was a portrait of an old lady who looked almost in her eighties. She had a sharp chin and high cheekbones and her pale skin was weathered and covered in wrinkles. The old lady’s graying hair was tied up in a bun and over it she wore a white bonnet. She had a hooked nose, almost too big for her face, with a sharp tip like the beak of a hawk. Below that nose she had very thin and dry lips. The edges of her mouth slanted slightly upward, giving her a smile that looked more like a smirk to Julia.

Before we get started, I need to prepare you for something. When you tell your friends, loved ones, or even complete strangers that you’re moving to New York, you will probably experience this phenomenon.

First, you’ll see excitement light up in their eyes, as if your move is going to let them somehow live out their secret inner dreams of adventuring in the Big Apple. They’ll probably ask you something like: “Oh really? What part of New York?”

Your response of “Buffalo” will evaporate that dreamy look faster than a drop of water drizzled on a hot griddle. The excitement etched on their face will quickly become shock, taken over by a false expression of cheer as they try and hold on to the delight they had for you only a moment before.

After the initial surprise, you’ll most likely see their face morph into concern, distaste, or maybe even disgust as they dredge up their mental pictures of the strange land known as Buffalo. The next thing out of their mouth if you live anywhere south of upstate New York is most likely something like this:

“Don’t you know how COLD it is up there? You’ll be buried in snow!”

I started playing fantasy football back when I was in secondary school - about ten years now? Give or take... In all this time I, and many others, have noticed an inevitable pattern. By the time the season is halfway through, every team has a squad that is 75% identical. Between your mini-league of friends, between every person's fifteen man squad, all players will, without fail, be derived from a pool of about thirty players (maybe about forty if you stretch it).

Think about it. Take last season (2012-2013) as an example. Less than 15 games in, the vast majority of players had most of the following: Robin Van Persie, Juan Mata, Gareth Bale, Luis Suarez, Michu (what is his first name anyway?), Cazorla, Walcott, Benteke, Lukaku, Baines, Ivanovic, Begovic etc. About the only variation between teams came in the defensive department - an area where most players choose to field only three defenders anyway (something else that can be improved upon).

And it takes away from the enjoyment of fantasy football!* You have Van Persie in your team so you get excited when he scores. But wait, every one of your rivals has him as well except that one guy who hates him so much so you're not really gaining any sort of advantage over the field. And in fact, some have him captain so are earning double points from him... Hmmm... Maybe you should be rooting against him? Seems counterintuitive.

First off I'm not quite sure when the first time was that I interacted with Tynan. It might have been on one of his numerous travel adventures, or one of his pickup artist posts. I'm not really certain. One thing I learned was that I really enjoyed his writing. He's got a blog over at Tynan.com. Check it out.

For the last few months I've been testing out SETT his new blogging platform. It now runs this site. And I'm super happy with it. So happy that Ive done a review of it. I've never publicly reviewed anything that runs one of my sites. But switching from WordPress to SETT deserves an explanation. Here it goes...